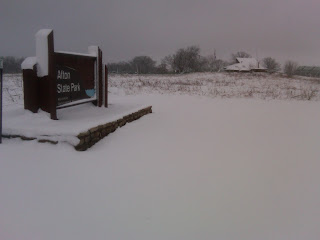 Yesterday's forecast said the snow would be north and west of the Twin Cities. Today, not so much. It looked like about 3-4" of snow by the time we reached Afton. Along the way, 4 cars in the ditch. The fifth car was off the road in the park and it was somebody we know - Jim McDonnell. We stopped and he said he was waiting for a tow.

We tried to run but the snow was slippery so it was a combination run / walk / slog. The trees were beautiful with all that snow hanging from the branches.

And we had a running companion. We are doggy sitting the sweetest little cocker spaniel - Bailey. 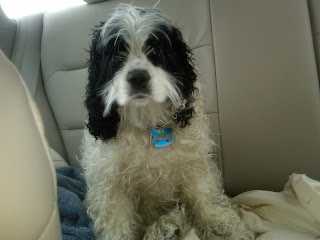 This photo was taken "after" we went running. She is one soggy doggy. But she had fun.
We saw Cedar Waxwings, Black-capped Chickadees, Slate-colored Juncos, and a White-breasted Nuthatch. We stopped and watched as 7 deer crossed the trail in front of us - no antlers on any of them.
﻿
Posted by Afton Runner at 3:00 PM