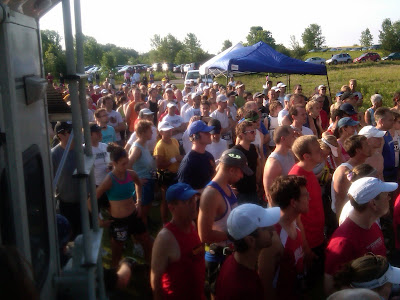 A funny thing happened on the way to the finish line, I started the race, took a wrong turn (along with several other people), did one loop and was running along talking to Les (a runner at Murphy Hanrehan Park). He told me I was first woman ! I'm a 5 hour marathoner so I knew there was a problem. He told me he was 10 miles into the race. I thought I was at about mile 5. So when I got to the next aid station, I asked for a map and figured out where I had to go to run the loop I missed. Back towards the start, adding on at least 2 miles, and probably more to my overall distance.

I did the Africa loop, and the Back 40, got to see Maria and Wendy at their aid station.

Also saw a Henslow's Sparrow (difficult to find bird) singing his little heart out on the north end of the park. I sent Larry a quick email to let him know.


When I got to the next aid station (I had been there twice before), I told him it felt like I was in the movie "Groundhog Day" because I kept doing the same thing over and over. It was also where I caught up with Patty and Geri Lynn (runners I met back in 1989!) so we finished the rest of the race together.  The Aid Station people were terrific (including Jeffrey, Lynnette, Annie & others), the race organization was superb. The volunteers and Afton SP people are wonderful. The food was fabulous - at the aid stations and the finish line. 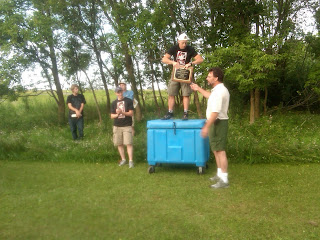 I told the finish line people of my mix up and my extra miles. This was a good training run for the 50K in a couple of weeks.
Gene the park manager presented John with a plaque recognizing the $$ the race has donated to the park over the years.
It is a great race, highly recommended !
Posted by Afton Runner at 3:39 PM