On my way home from Boot Camp class yesterday, I saw an upside down turtle in the middle of Warner Road. I did a U-turn and went back to check on it. S/he wasn't dead, but that heat, in the middle of a busy road, upside down, not a good place for a turtle. 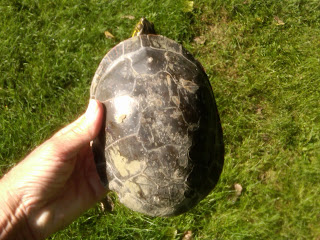 Checked it quickly to see if there was any major damage - should I take it up to the Wildlife Rehab Center in Roseville?  S/he actually looked pretty good so I took it home with me to examine it more closely. There was a nick on the left side of the shell. The bottom had some scrapes. The back legs hung limp but when I placed it in the grass it took off quickly. I placed it in a shallow bucket of water for the evening to rehydrate and check on again this morning. 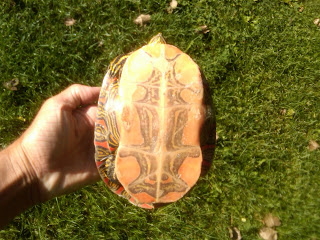 This morning s/he seemed really healthy, hissing at me and trying to get away. Maybe the best thing to do was to return it to the river -  away from roads ! Loren suggested Hidden Falls. I haven't been there in years. 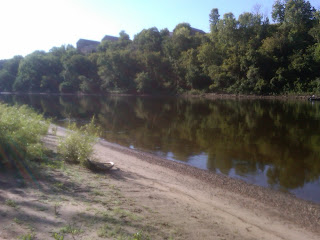 The river was beautiful this morning, calm and fairly clear.   I could see minnows and weeds in the water, a perfect spot for a turtle. S/he quickly took off, swimming into the deeper part of the river.
On the other side of the river there were a couple of guys catching fish from their boat and another couple of people playing catch with their dogs. I was trying to find a nice scene to take a photo when a turtle showed up next to the shore where I released the one this morning. I don't know if it was the same one or not, but it was the same species and the same size. It just floated in the water for a few minutes with its head up, looking around. And then it was off. And so was I. It was kinda creepy down there, a few men hanging around, and me.
Hope the turtle stays away from the roads!
Posted by Afton Runner at 4:57 PM