It seems like we usually take the scenic route and this time wasn't any different. Yesterday we drove up to Lutsen, stopping at Hawks Ridge and not at Betty's Pies. After we arrived at the Caribou Lodge, I checked us in and Loren went to see if he could get our race packets. We found our room, unloaded the car and sorted through the race stuff. For something different, we bought TV dinners that we nuked in our room, watched a little tv.


This morning we went to cheer the 50K people that started at 7am. It was a great time to see people like Steve and Carolyn with Steve running his first race in 3 years, Jason a fast first timer on this course, Wendy an energizer bunny, Maria who does everything, Carl a running machine, the Donny / Bonnie dynamic course marking team, Helen an awesome runner who is having a really good racing year, and Paul who says he is concentrating on speed rather than distance. 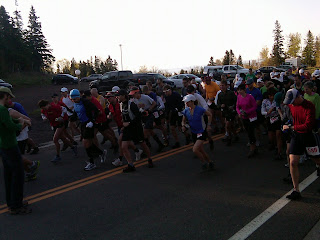 After the 50K started, we had 2 hours before our race began. Some of us went to breakfast at the lodge restaurant. The staff were friendly and it looked like it had been totally remodeled since we were there in 2008. A table by the window was perfect for watching the snowshoe hare and the birds at the feeder. 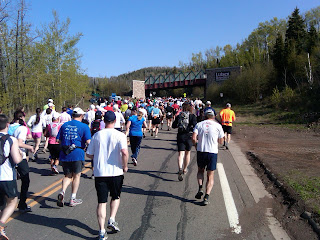 It was an easy walk back to the room to finish preparing for the race. The usual questions: How much water are you going to carry? How much food? What are you going to wear? Are you going to bring a jacket? With those questions answered, we walked over to the start where we talked to Carolyn and Nancy. They looked fabulous, like they were well trained and ready. It was our turn to run.

It was a perfect day, temps in the 40's at the start, lots of sunshine. We knew we had a beautiful trail and the whole day ahead of us.

I like running in the woods on trails and it pretty much doesn't matter how rocky or rough they are. I don't wear trail shoes, just road shoes that have enough cushion to protect my feet from the rocks. Slipping usually isn't an issue and the stiff soles of trail shoes make my feet ache.

Talked to a few people during the race. Found out that there was a group of women doing this as their "ladies weekend". They graduated from high school together in 1995. A couple of them had experience with trail races but they ALL decided to do this. What a great idea.

Stopping to take photos of the wildflowers slowed me down a little, they were too pretty to just pass by. At the packet pickup, someone had put together an information board with photos of wildflowers and names of the flowers: Dutchman's breeches, wild violets, marsh marigolds, bluebells and more. 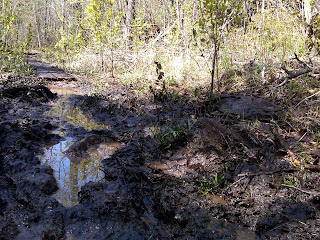 How can this event can be a ladies weekend? Maybe it has some spa like features? A potential spa adventure for me included some acrobatics followed by a dip in the mud. Could wearing mud on half my body for 10 miles be considered a spa treatment ?  How did I do this? I tried to navigate around some mud. As I jumped to a middle rock, my foot slipped and I fell sideways. Luckily, I missed all the other rocks as I landed in the muck.
Not only did we finish, so did all the people we talked to before the race. One exception - Carolyn the saint. She gave up her race to walk an injured runner back to civilization. Carolyn talked to the runner later and was told that they would be OK. Carolyn has plans to to be back to finish this race. Paul the speedster had an awesome race - 2nd male in the master's division. His speed training seems to be going well. So is Helen's, 2nd woman in the open division.

It was a well organized race THANKS to Gretchen and Mike, the race directors and ALL of the volunteers.
Posted by Afton Runner at 9:00 PM