We arrived at Afton about 9:30. A school bus was there filled with teenaged youth. They headed out for a run about the same time we started our run. We didn't see them again but the bus was still there when we finished.

Larry was in the parking lot and had already finished his run.
We headed out to do the snowshoe loop. Saw Jim and Bill running together, Karen was close behind. I think they planned to start at 7:00. Nancy and Tom were off in the distance. Talked to Jeffrey, he was finishing his 25K training run. Then crossed paths with Jan and Wendy -- surprised to see them because they usually don't run at Afton. They were doing a 25K loop. Last month they finished a race in Kansas so their training is going well.

We ran almost 4 hours, including talking time and birding time. I didn't bring the binoculars but did hear some of the new "regulars", the Eastern Towhee, a Brown Thrasher, Eastern Bluebirds, Tree Swallows, and Meadowlarks. There was a large flock of Goldfinches in one location and an occasional pheasant calling. I didn't see the Eastern Phoebe on the nest but did see a small flock of Yellow-rumped Warblers. Also a couple of raptors in the woods.

The big news, the bluebirds were hatching today ! They look like little leaves in the nest. 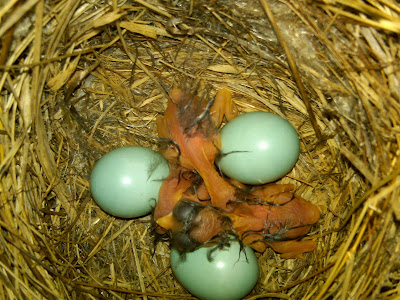 The Barred Owl is here in Maplewood - again. I assumed it was the same one but I looked at the photos. The feet are very different. The one on Wednesday had feather covered feet and one sore toe. Today's bird doesn't have as many feathers on the feet and doesn't have a sore toe. This one appears to be possibly molting. I don't know enough to make that determination. Pretty cute, huh? 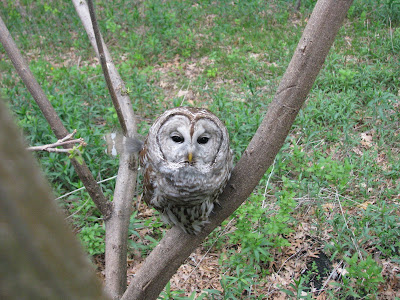