The rain held off and we were able to do some bird banding today. 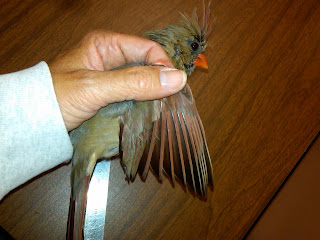 This is a cardinal that had been first banded in 2008. At that time, it was thought to be about a year old. That means that it is now about 4 years old.
Someone asked Jim about the oldest bird. He said that they once had a Cardinal that was 9 years old !
The toads were trilling in the pond. Jen went looking for them and found at least 5 toads and some strands of eggs. I always learn new things when I am there.
Larry went to Afton last week and found the American Woodcocks. He could hear them and saw one silhouetted against the setting sun.
Then off to Afton to run hills. I wanted to do them yesterday but I had too many aches and pains. It was a good decision, today didn't hurt. It was hard but hills always are.
The birds were pretty quiet. The Brown Thrasher wasn't singing in the usual spot. Heard two Eastern Towhees and several White-throated Sparrows, Field Sparrows and Chipping Sparrows. Other birds were singing but I could not identify them.
Posted by Afton Runner at 9:01 PM