Finished my weight training and got to do some regular bird stuff. First bird stop - Carpenter Nature Center. One of the birds banded at Carpenter Nature Center today is a beautiful White-throated Sparrow.  I used to think that a sparrow was a sparrow was a sparrow - just little brown birds eating all the food at my feeders and keeping the more colorful birds away. Beginning last year I started to discover the uniqueness of each species and the variability between individuals. It's amazing. 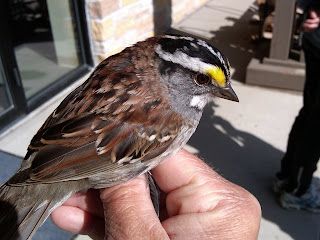 Take this little guy, he shows white stripes on his crown and "eyebrow". The "eyebrow" also has yellow markings. His size (we measured his wing chord) identified him as a male. He has probably spent his winter south of us, possibly southern Iowa or Missouri.

For comparison, I had one bird, same species, a White-throated Sparrow, spend the winter in my front yard. This was a little unusual but 3 other people on the  MOU listserve also reported that they found other individuals in various locations around the Twin Cities this winter. Another difference, "my" sparrow had tan stripes on his head instead of white. See Dan Tallman's blog for more about this.

After Carpenter, I went to Afton State Park and checked bluebird boxes. I have several assigned to me but only one had a nest last week. This week, it has eggs ! 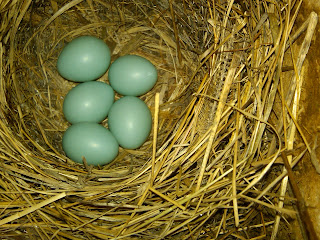 The parents were near and not happy so I quickly left. I hope we have good luck !
Posted by Afton Runner at 8:00 PM