I usually feed the birds in the morning and it's not long before the squirrels move in to eat all of the seeds. This morning they were unusually quarrelsome resulting in quite a bit of noise. I ignored them for the most part.
Many left the deck and then I noticed they were making warning calls, at least 3 squirrels calling. I looked to see what was going on and a rather large bird (larger than a robin) flew into a tree just off the deck. I was fascinated, first by this beautiful bird and because two small squirrels were scampering around on the tree branches without a care in the world, within feet of this raptor ! I made the decision to watch rather than go for the camera. Why? Morbid curiosity?

It was a beautiful bird, rufous barred chest, big black and white stripes on the tail with smaller patterns on the wing. The bird saw me and moved to hide behind the trunk of the tree. Then it was off, flying low over the house. I ran to the front of the house to see if it would land on another nearby tree. I didn't find it again.

The National Geographic "Complete Birds of North American" book identifies it as a Red-shouldered Hawk. The book also says they eat frogs, snakes, lizards and small mammals. I guess it was the squirrels lucky day. How did they know? 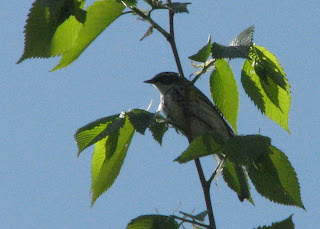 The other birds found: Ruby-crowned Kinglet, Yellow-bellied Sapsucker and Yellow-rumped Warbler. Of the 20 or so photos taken today, this is one is one of the better ones, at least the bird can be recognized.
Posted by Afton Runner at 9:48 AM