Hunting in the back yard

This afternoon I heard the noise of the Red-shouldered Hawk squawking in the backyard. I grabbed the camera and hoped to get a photograph of it. As carefully and as stealthily as I could, I went out onto the deck wishing I would have grabbed the binoculars too. What a joke, thought I could sneak up on a hawk? Oh well, I just had to try. I saw the hawk perfectly framed in the leaves, just off the deck. The screens from the porch blocked the photograph. I continued moving towards it hoping for a photo. Before I got any photos it took off with another hawk following. There were two Red-shouldered Hawks !!!

Then I saw it, an owl in the tree! The hawks must have been after it. I had a camera, the owl was fairly close, could I get a photo? 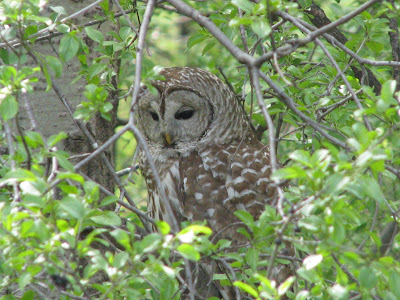 I quickly took a few shots because she was a cooperative subject. I had a good camera and filtered light. I thought to myself, this is really sad, I didn't even know what kind of owl it was. I knew it wasn't a Great Horned Owl.

Who cares, just take some more photos and worry about what type of owl it is later.

I still can't belive it but she moved closer to the deck, almost directly under where I was standing !! 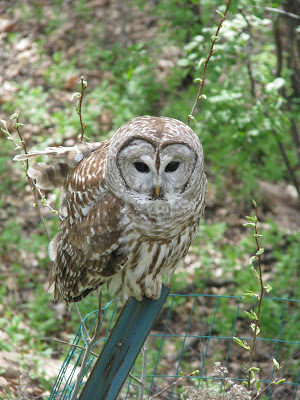 The camera's low battery light came on. I just kept taking pictures hoping for that photo of a lifetime.

The batteries died and I just watched her. She was obviously hunting for something in the leaf litter. There was no way she was going to catch a mouse, in broad daylight. Mice are too fast. There are too many leaves. No way.

She flew down onto the ground, paused a couple of moments and flew back to the tree. She had a clump of leaves in her talons. Carefully she pulled them away like she was unwrapping a Christmas present. I could see the long tail of a mouse! She tucked it under her foot for while and didn't seem to be in a hurry to do anything with it.

Another 15 minutes went by of watching her perch in the tree. I went inside the house and got new batteries, a new memory card and returned back to the deck. She was still there but I couldn't see the mouse.  She dropped something on the ground. I watched as she turned this way and that, trying to decided who knows what. She finally flew to the ground where she remained for probably 10 minutes before finally eating the mouse. She flew back to her tree and did a couple of the "who cooks for you". I won't bore you with all of the details. Lets just say I spent about 2 1/2 hours today watching a bird. She was a very accurate hunter. She pounced twice with a 100% accuracy. She caught both mice even though they were buried in the leaf litter. I can see why the birds were alarmed that she was around. And like I said, I'm not a bird expert so I really don't know if she's a male or female.

Oh, and I got my hour run in at Hyland Park this morning. It was perfect running weather.
Posted by Afton Runner at 7:14 PM