Ran hill repeats at Afton, same as last week only much colder. I wore a jacket and didn't take it off the entire time. What is this, April ???

The Brown Thrasher was singing in the same area as  last week. I stopped to look for him, hoping to get a close up view. Found him and an Eastern Towhee !

Checked out the bluebird boxes. The box that had eggs last week didn't show any activity, nobody perched nearby, nobody flying in or out of the box. I gently knocked on the box to hear if there was any activity inside - nothing. I carefully opened the box and took this photo.  The box is above my head and I can't see into the nest. Last year I used a mirror and it worked OK. This year I'm using my phone. Here is what I found. 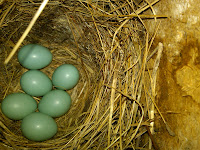 She has 6 eggs, one more than on the 16th. Both parents flew by me and landed in a nearby sumac. I quickly closed the box and moved on, careful not to leave a direct trail back to the box for predators to use.
Eggs are generally laid at the rate of 1 egg per day, on consecutive days. From this info, my best guess is that the first egg was April 12 and the last egg laid was the 17th.
Eggs hatch 11 - 13 days after the final egg. Based on this info, I predict the eggs will hatch around April 29, plus or minus a day.
Another set of nest boxes had a pair Tree Swallows guarding both of the boxes and both boxes have a partial nest. The birds acted very disturbed and were diving at me so I quickly left. My philosophy, don't cause harm. I didn't want them to abandon the partial nest. My question, do Tree Swallows build multiple nests like wrens? I checked Sibley, National Geographic and the generic Cornell website - nothing about multiple nests.
There was a large flock of Brown-headed Cowbirds feeding in the field. Will they lay eggs in the Tree Swallow nest? I think the cowbirds are too big to fit into the swallow nest box, but we will have to wait and see.
On the drive out of the park, I had the good fortune to see a pair of eagles soaring over the park. I got out the binoculars and was surprised to see the brownish body and shoulders of a Golden Eagle. Awesome.
Then off to yoga class. Stephanie worked us hard. I used core muscles that are seldom used. I feel a little pain but have much to gain.
The Wildlife Rehab Center was a busy place. They must have added additional shifts. We were finishing our late afternoon shift when the evening crew arrived. A couple of cool creatures I got to see were the Blandings Turtles and the Yellow-bellied Sapsuckers (one male and one female).
Another great day !
Posted by Afton Runner at 11:00 PM