Getting back into training

I've been doing too much travel and not enough training. To get back into it,  I hit the weights and hill repeats this week. My muscles reminded me that I'm out of shape. The good news, I lost some of the weight from vacation in January. The bad news, not enough. 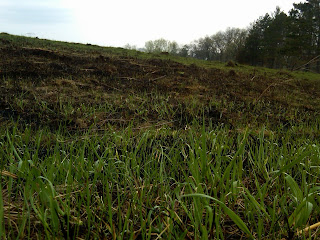 Afton is looking better.  The burned areas are starting to green up.

One place that I do hill repeats is on the first hill out of the parking lot. It's a fairly level trail, a gravel road really. A former coach told me that a 14% grade is about right for repeats. This hill is a little steeper in places so I really have to pace myself. I know the pain of repeats will it will pay off later when I run in the mountains.

Along the trail I noticed some of the wild flowers are blooming. A couple of flowers that I found are the Rue Anemone and the Blood Root. 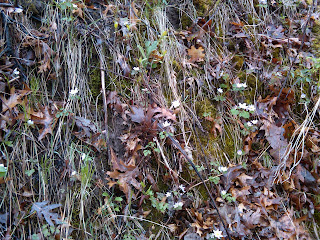 The photo of leaves and tiny flowers shows the Rue Anemone flowers as white. Wildflower books  describe the flower as white. The ones in Afton look pink to me. Look for them and tell me what you think. 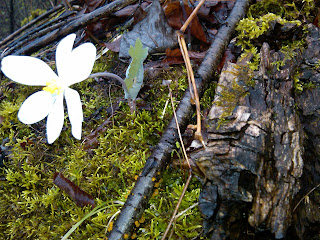 The Blood Root flower is a larger white flower. It is a member of the poppy family. One characteristic is that the flower opens during the day then closes at night.

Even though it was raining, the birds kept me company. The White-throated Sparrows are returning and they were at the top of the first hill. I could hear the Eastern Meadow Larks singing. And my favorite bird of the day was the one singing as I finished my 4th hill repeat. It had a varied song so I thought it was some kind of mockingbird. But I had to get to the top before I looked for it. After I turned around at the top, and on the way down I stopped to look. It was still singing. A bird, in a flash that reminded me of the reddish brown color of a female Cardinal, flew across the trail and up into a tree. I watched, and it obviously was not a Cardinal. It sang that wonderful song. I got out my phone with the bird recordings and played the Brown Thrasher song - it matched !! I enjoyed it for a little while but it was raining, my phone was going to get wet, I had a Twins game to get to...  I just started running again when I saw movement in the bushes along the trail - another Brown Thrasher ! And this time so close I could admire the coloring, the long tail, the streaking on the chest, the decurved bill - just WOW.

So even though it rained the entire time, I stopped to enjoy the wildflowers and the birds. I finished my hill repeats and got to the Twin's new stadium just as the sun was coming out. Our seats were high so it gave us a great view of the ball park. Good game, they won, 8 - 0, good company (with my sweetheart), good day ! 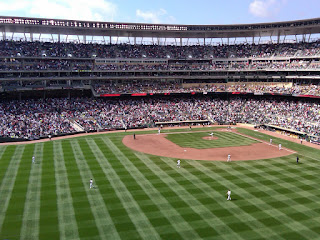